With the W16 and W26 product family, a new generation of photoelectric sensors is dawning which is equipped with everything that can make work easier and processes safer, and therefore more efficient. From the innovative BluePilot operating concept with feedback LED to a standardized service portfolio for all kinds of applications, all the way through to new technologies which detect shiny, uneven, perforated, and transparent objects in particular more reliably than ever before. All sensors are equipped with IO-Link as standard. As smart components within networked production and control processes in complex machine environments, they are key to the industrial future in the context of Industry 4.0.

The TwinEye-Technology offers the very highest levels of operational safety for high-gloss, reflective, and high-contrast objects – all of which are commonplace across a wide range of industries. This technology uses one sender and two receivers. The sensor only changes the output state if both receivers (eyes) produce the same assessment. Should the light beam be deflected as a result of the uneven or high-gloss surface, the sensor maintains the status until the second receiver can no longer detect the object either. Switching errors are therefore reliably prevented.
LineSpot technology ensures that perforated, textured, and uneven objects can be reliably detected. The light spot, which has been extended to form a line, allows optical information to be provided about irregularities, such as gaps or rough surfaces.

The ClearSens technology ensures an optimal view when it comes to transparent objects such as glass or plastic bottles, ampules, pipettes, transparent films, trays, etc. The operating element can be rotated to set the required mode intuitively depending on the object characteristics, and then pressed to carry out the sensor teach-in for the reflector. If dirt produced during the production process reduces the amount of light emitted by the reflector, AutoAdapt technology compensates for this by adjusting the switching thresholds. This allows cleaning intervals to be extended and the availability of the sensors to be increased.
Depolarizing objects such as foil-wrapped containers or rolls of adhesive tape place particularly high demands on sensors. The new photoelectric retro-reflective sensors from SICK filter the received signal geometrically and can therefore reliably differentiate between reflectors and depolarizing objects to avoid switching errors.
However, the new sensors are not only application specialists. They also provide the input required by every process chain on the route toward Industry 4.0. They are all equipped as standard with IO-Link and, as smart sensors, they can play an active role in end-to-end automation networks. This ensures a significant optimization of costs and processes along the entire value chain in smart factories.

While digital production processes are getting smoother and smoother, conditions in the analog environment remain harsh. Therefore, the significantly improved optical and mechanical ruggedness of the new sensors is a clear advantage. Ambient light in the form of direct sunlight, LED illumination, or reflections from high-visibility vests has, until now, led to switching errors or even machine downtime. SICK has equipped the W16 and W26 product families with a newly developed OptoFilter – sensors are no longer dazzled and see only what they have to see.
Furthermore, the mechanical ruggedness of the sensors has improved as well. The VISTAL® housing from SICK is made from a special glass-fiber reinforced plastic and is resistant to extreme loads caused by thermal, chemical, or mechanical influences, resulting in an increased service life. Last but not least, the sensors’ laser inscription allows clear identification of the device type, even after years of operation. The printed QR code takes the user directly to further product Information.

Usability is our priority

The usability of the new sensor ranges creates a “cockpit feeling” in the machine room. BluePilot, the new blue LED alignment aid enables faster alignment of sensors and reflectors as well as senders and receivers for through-beam and photoelectric retro-reflective sensors. No further setup is required. In live operation, the LEDs also offer a diagnostic function: Should a change in detection quality arise as a result of contamination and/or vibration, the LEDs indicate the degree of impairment by slowly increasing or decreasing the dimming. In this way, the machine operator can detect the fault at a glance early on and thus find a solution before it comes to production failures caused by standstills. Setting up the new photoelectric proximity sensors with BluePilot is just as intuitive a process. To this end, the advantages of the teach-in button and potentiometer have been combined in one operating element. This allows the sensing distance – which is in turn visualized by the blue LED ring – to be configured in a matter of seconds. What’s more, the sensor data is displayed on mobile devices such as tablets or smartphones via a Bluetooth interface so the production staff can keep an eye on the machine status. 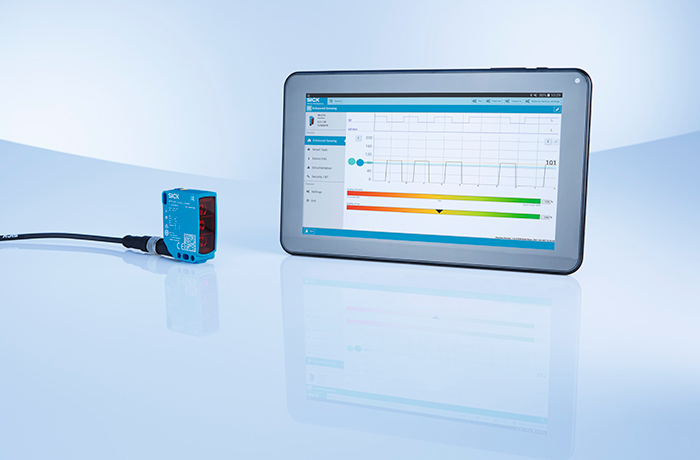 With the help of a new smart production system, SICK has been manufacturing W16 and W26 sensors since July 2017. Production cells enable the manufacture of bespoke product variants within the context of a modular system under the same conditions as serial products – in a traceable manner, with a serial number for indexing and cross-linking. The material flow is made transparent by track and trace. The multi-agent system is self-teaching and self-optimizing, adapts the sequence of production orders in line with priority rules, organizes transport jobs for raw and work-in-progress materials, and controls the process in the production modules.