Precise control of a picking robot

Packing foodstuffs, regardless of whether they are raw and fresh or in their final, packaged form, involves a high degree of automation nowadays. To broaden the scope of opportunities in picking applications, global robot manufacturer ABB and SICK have developed a solution that adds one more dimension to the control of picking robots, resulting in fewer goods damaged in the process. The solution is based on SICK 3D vision and ABB robot technologies. 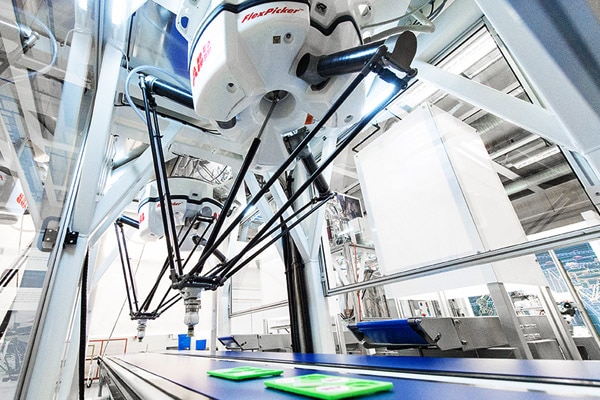 In most cases, belts transport objects and robots pick them up in order to sort or package them. When dealing with objects with variable size and thickness arriving on belts in random positions, it is difficult for the robots to adapt to the natural variations to pick them up correctly.

The solution: A 3D vision system

While conventional 2D vision systems are performing sufficiently in many cases, they lack the height and volume information which is needed for determining the accurate position when goods naturally vary in terms of height and shape. 2D vision systems determine objects using contrast and color, while a 3D detection system is based on height and volume measurement instead. This means that objects can be detected more precisely and reliably in situations when the contrast between the objects and background is low or varying, the objects vary in height and shape, or when the carrier belt is wide enough to cause position distortions in a 2D system.

A key to the process: The height of the object

Detecting the height of the object is a key factor when it comes to improving the picking process. It increases throughput and reduces the risk of damage. Using this technique, a robot is able to pick up objects much quicker - without the risk of colliding with them. In addition, it offers more options for volume and weight inspection and detecting anomalies on the object.

SICK and ABB jointly developed a solution which combines the advantages of 3D detection in a highly marketable product. The solution is made up of components from both companies. SICKs part of the solution consists of the IVC-3D vision sensor and the Belt picking toolkit, a piece of software which allows the IVC-3D to carry out height-based object detection. To ensure easy commissioning, the toolkit also features a webbased graphical user interface (GUI) for setting object and belt parameters. Following a simple step-by-step guided workflow, the camera and robot can be calibrated in a common coordination system. The pre-calibrated IVC-3D combines illumination, image recording and analysis in a single camera. Based on laser triangulation, the IVC-3D can capture and report data in three dimensions. As a result, picking and handling of once difficult objects can now be carried out with ease. Data being reported contains both three-dimensional position data and timing information - the combination of these two data sets allows ABB to control the picking process in both 3D space and time.

IVC-3D vision sensor from SICK. On the right as variant with inox-housing. ABBs part of the solution consists of its renowned robot products; the fast IRB 360 FlexPicker™ robot and highperformance line master controls, mainly the PickMasterTM software, are most commonly used here. It is the Pick Master™ software that forms the interface between the IVC-3D camera and the robots. The robots are constantly fed with the guidance information needed to pick the objects at the right time and place, based on the coordinates provided by the IVC-3D and the movement of the belt. The result is that objects are picked up successfully and reliably, making this an attractive solution for the majority of users working in the field of conveying.

Flexible fields of application allow handling that is gentle on products 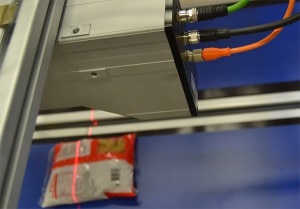 Thanks to height-based object detection and guidance, the loss of quality and machine downtime are reduced in challenging picking applications. Irregularly shaped objects like pasta packed in pillow bags, fresh cheese, nuts, frozen and therefore fragile berries and vegetables, etc. can now be handled in a gentler fashion. Even if the bags vary in shape, contrast, orientation and size, the height-based detection principle carries out the job both more flawlessly and at lower setup complexity in comparison to 2D technologies. The same benefits also apply to fresh items like bread, fresh fruit, vegetables, and meat. In all cases, the robot can approach the ingredients in a more controlled manner, paving the way for a gentler product handling process that takes away additional barriers standing in the way of consumers enjoying delicious food.

All articles
Please wait a moment...
Your request is being processed and may take a few seconds.
Loading ...