Open the door, load the dirty dishes, add detergent, and restart the cycle: dishwashers have to complete hundreds of challenging test cycles before they can be relied upon to perform in day-to-day operation. To make things easier for the personnel carrying out these tests, a new mobile robot system was developed at the Fraunhofer IPA on behalf of Bosch und Siemens Hausgeräte (BSH). The robot takes over all aspects of operating the machine. One of the focal points was user safety: the safety concept includes the use of laser scanners to protect the working area while allowing the robot's hand to be inserted with the help of an enable switch.

Manufacturers must carry out long-term testing to check the endurance of household appliances and the integrity of the control. Dishwashers, for example, are tested with a variety of detergents and water hardnesses. In each case, several hundred test cycles are necessary, during which the machines need to be opened, new dirty dishes loaded, and new detergent added before the program is restarted. Previously, these tests were very labor-intensive, as the machines had to run sequentially and manually in single-shift operation.   Researchers at the Fraunhofer IPA have developed a mobile robot system for BSH which takes over all aspects of dishwasher operation in the context of quality assurance. Dirty dishes are loaded, cleaning tabs are added, and the machine is restarted - all as part of an uninterrupted continuous process. In this context, safety was a major challenge, since operators have to work in close proximity of the robot and even take it by the hand in order to teach-in the operation of the dishwasher.

A two-stage enable switch integrated ergonomically into the tool meets this particular challenge. While the movements are being taught-in via the control panel, S300 safety laser scanners in the corners of the mobile base monitor the area around the robot. If anyone gets too close to the robot, all movements are stopped. The size of the protective field is varied depending on whether the mobile platform or the arm of the robot is moving. The specific properties of the robot arm are taken into account in the safety concept. Particular advantage is taken of the fact that the arm is intrinsically safe within certain limits and, therefore, can remain active in some situations, for example, while the stronger and thus more dangerous axes of the mobile robot platform have to be shut down. 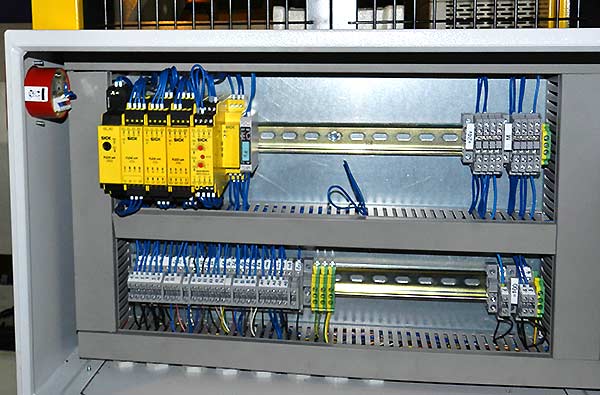 At the heart of the safety concept is SICK's Flexi Soft safety controller, which processes both sensor data and the signals from the emergency stop systems. An interface to the ROS (robot operating system) used on the mobile robot has also been implemented. The interface has been set up to ensure that inconsistencies and errors in non-safety-related software are detected. Conversely, however, there is also an assurance that an error in the software will not affect the integrity of the safe controller. 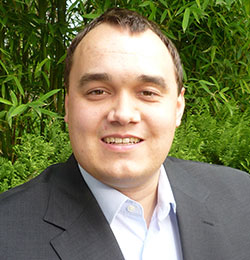 New movements can be specified intuitively simply by taking the robot by the hand, explains Theo Jacobs, project manager and research associate in the robot and assistive systems department. Alternatively, the robot arm or the mobile platform can be controlled using the corresponding keys on the control panel. At the touch of a button, the robot will learn a grab position. A second click by the operator on the graphical user interface specifies whether the gripper should be opened or closed, or a sensor should be queried. 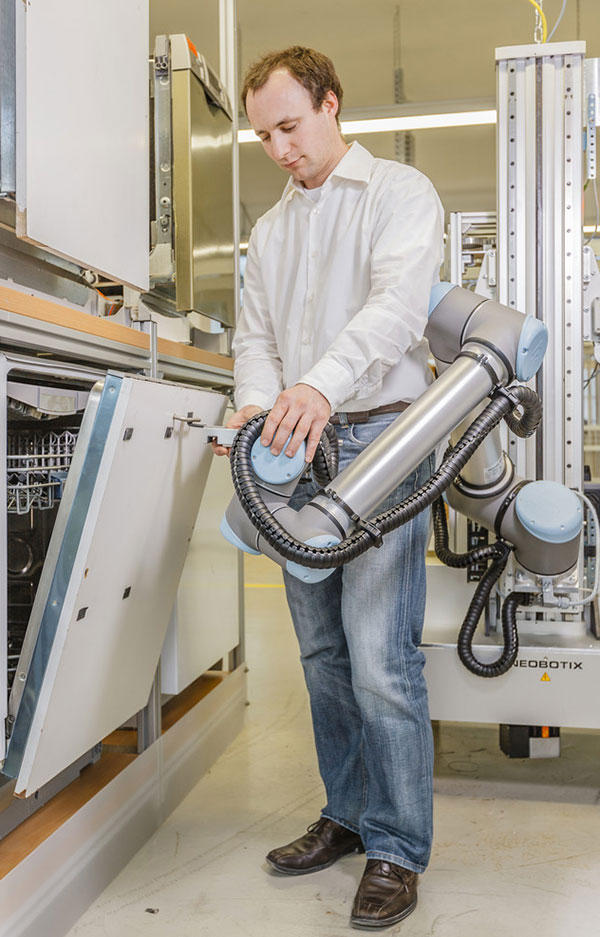 As the sequence scripts are in graphical format, even non-experts can compile something from the programmed movements on completion of a short teach-in period. A host computer is used to specify which machines are to be put into operation and which are to be excluded from the test. Employees can easily call up the test data logged by the robot (the number of cycles completed, for example) at any time.   The mobile robot system developed at the Fraunhofer IPA can easily be adapted to meet individual requirements. Companies can use it to automate a variety of processes: in addition to various tasks in quality assurance, robots of this type can be used to support logistics or assembly processes, or for inspection tasks