Gulftainer Company Limited was established in 1976 in the Emirate of Sharjah in the United Arab Emirates. The company's primary role is to manage and operate the container terminals in Port Khalid and KhorFakkan on behalf of Sharjah Port Authority. The Port of KhorFakkan, United Arab Emirates, is the Indian Ocean location of one of Gulftainer's UAE-based container terminals (KhorFakkan Container Terminal, KCT). KCT is operating 20 ship-to-shore quay cranes to load and unload containers from the shipping vessels. Due to the high costs for the anchoring time for vessels, any docking interruptions or offloading delays must be prevented, because time is pure money.

During anchoring, multiple ship-to-shore cranes are operating at a vessel to minimize the offloading period. While the cranes are moving sidewise to change positions relative to the various container stacks, they often come in close proximity with each other. Furthermore, in order to reach all stacks, they have to move their boom very close to the ship structures such as antennas, radar systems, on-board buildings etc. 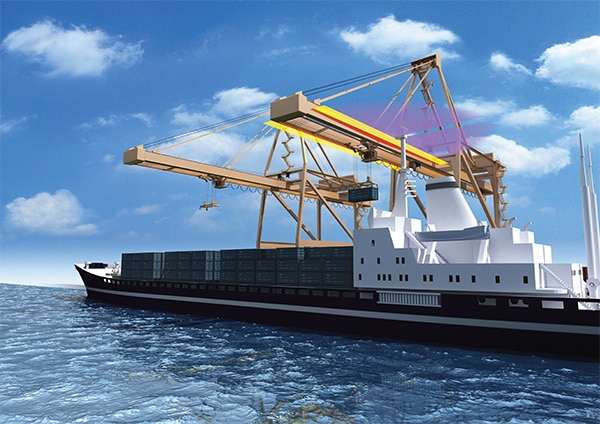 To prevent any collision between the boom and the vessel, sensors are placed on the boom in order to indicate a dangerous situation arising and/or to stop the movement of the crane if necessary. In respect of the harsh ambient conditions and rough operation, reliability is a major requirement of such anti-collision systems.

Therefore, the very robust LMS511 2D laser scanner were used in combination with the Flexi Soft safety controller, a first of its kind for this application in the ports industry and known as the Advanced Object Detection System (AODS). By using cyclic test commands to the scanners and monitoring their detection response via alternating switching outputs, especially through the long reach moveable cable, a high degree of diagnostic coverage could be provided. 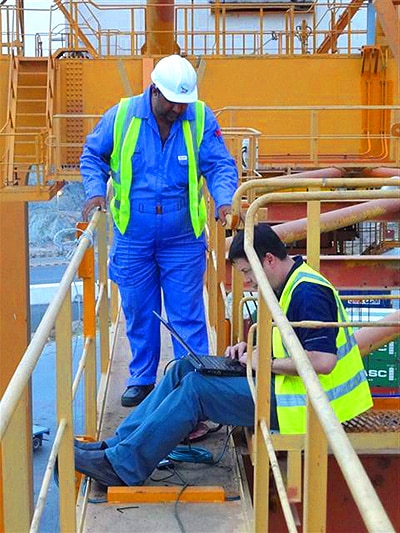 The functionality and reliability tested were well above expectations, and free of any glitches. Indeed, because of the simple installation coupled with the time-of-flight technology of the LMS511 and Flexi Soft diagnostic at minimal extra investment, Gulftainer, the ports operator of KhorFakkan, decided to equip all of their 20 ship-to-shore cranes with LMS511 and Flexi Soft. The Terminal Engineer, Ken Marriott, said: It is very easy to install and program the unit … I am very pleased with it.