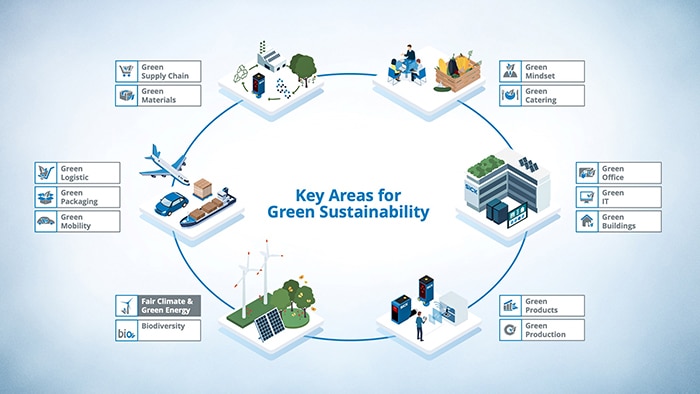 Climate change is the greatest challenge and threat to the world's population. 95 percent of all climate scientists agree: Man-made CO2 emissions are to blame for negative climate change. At SICK, we are taking responsibility and gradually reducing our CO2 emissions. Our energy policy encompasses the sustainable procurement and generation of energy to ensure that our earth will remain a place worth living for future generations.

We use specific targets to track and measure the success of the measures we take. By signing a new climate protection agreement with the German state of Baden-Württemberg, SICK has voluntarily committed to reducing its net greenhouse gas emissions to zero at all German sites and all production sites worldwide by 2030. This commitment refers to scope 1*, scope 2** and identified scope 3*** emissions.

In Germany, SICK achieved this target back in 2013, namely for its emissions at its sites including the upstream generation of energy (scope 1 and 2) and business travel (scope 3). Other scope 3 emissions are to be recorded and offset.

Green electricity: To avoid CO2 emissions, SICK has been using certified green electricity at all German sites since 2013. To achieve the highest possible environmental standard, the electricity is certified according to the “OK Power Label”. This means, among other things, that 100 percent of the electricity is generated from renewable energy sources, and at least one third comes from newly built power plants, helping drive the energy revolution. Across Germany, SICK can prevent around 7,300 tons of CO2 emissions per year in this way. SICK also aims to switch its global production sites to green electricity by 2025 or, if this is not available, offset the emissions.

Photovoltaics, geothermal energy and combined heat and power (CHP) plants: SICK generates electricity and heat from renewable energy sources on its own factory premises. These include heat generation from geothermal plants, gas-fired CHP plants for efficient electricity and heat generation, and power generation from photovoltaic (PV) systems, which are established at numerous SICK sites. SICK plans to increase the share of self-generated electricity (PV and CHP) to 40 percent in Germany by 2025 and globally by 2030. In addition, we are always looking into the use of gas from renewable energy sources. If this is not feasible, the CO2 emissions are offset.

Small biogas systems in Nepal – a climate project currently sponsored by SICK: Small biogas systems are developed for farming families in Nepal, which replace open fireplaces. The systems are operated with otherwise unused cow manure, which is converted into biogas through anaerobic fermentation. The biogas is led into the gas stoves in the kitchens through pipes. A biogas system saves about two tons of firework a year and therefore two to three tons of CO2 per year compared to the use of open three-stone hearths.