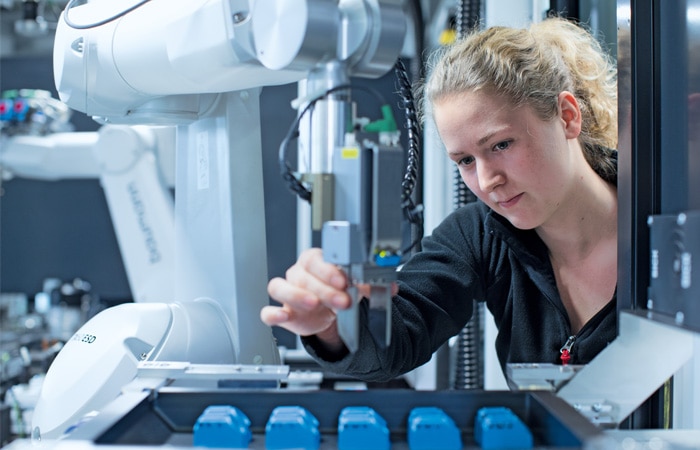 History: The evolution of robots and cobots

Industrial robots appeared around the middle of the 20th century and continued to develop with a boom occurring in the 1970s after the first design of a fully electric, 6-axis articulated robot arm by Victor Scheinman at Stanford University in 19691. Following this, a number of Japanese conglomerates and many US and European companies introduced their own commercially available robots and the world embraced them as an essential part of manufacturing. There are a huge range of applications for robots, including and not limited to, welding and painting to packaging, labeling and palletizing.

Since the introduction of the 6-axis articulated robot, there have been many new types and variant of robot introduced and each manufacturer have their own preferred names and description, for example: “Scara”, “Delta” and “Jet” to name a few. In 2015 an estimated 1.64 million robots were in operation worldwide2. All of these robots sold since the boom in the 1970s up until around the 2010s were always designed and installed to operate autonomously or, at most, with limited guidance so that they wouldn’t go crashing through a fence or into another structure (or person).

Then in 1996 a paper called “Robots for collaboration with human operators”3 by Colgate, Wannasuphoprasit & Peshkin was presented at the proceedings of the international mechanical engineering congress and exhibition in Atlanta. This paper, which was voted best conference paper, mentioned the word “Cobot”.

In it, a Cobot is described as a “Robotic device which manipulates objects in collaboration with a human operator”. Following on from this, there was a lot of interest in the first decade of the 21st century but everything started to accelerate when KUKA released the world’s first Cobot in 20044. Kuka have been refining this technology ever since and new players entered the market such as Universal robots who released their “UR5” in 2008, Rethink Robotics with “Baxter” in 2012.

The description of a “Cobot” as a robot that works in “Collaboration” with a human operator has led to much confusion in industry. In fact, the term “Collaborative Robot” is now widely used and there is much debate about “What exactly is a collaborative robot application”? 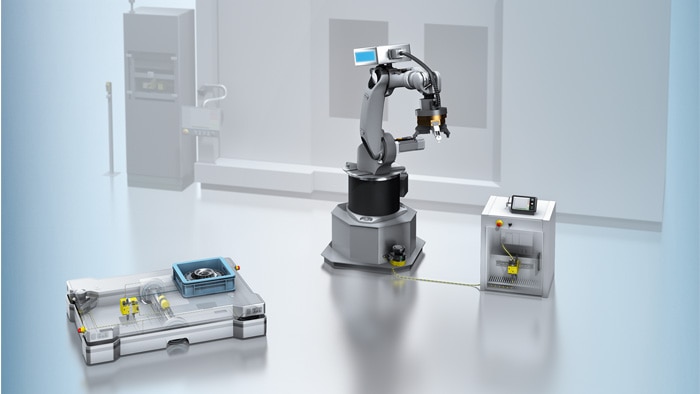 Taken from the Oxford Dictionary, to collaborate is to “work jointly on an activity or project”. A few examples collaboration could be:

So how does this relate to robots? First, let's look at an example of two people taking turns to piece to hammer a large peg into the floor. Since both people are working jointly on the activity, it would not be unreasonable to call this a collaborative activity. However, what happens if we replace one of the workers with a robot. It would certainly require a full risk assessment and with the nature of the work, would almost definitely require safety measures. However, this activity is also collaborative but there is some confusion in industry as to “What exactly is a collaborative robot application?”.

When robots were first introduced into industry, safety was a huge concern. The standards ISO 10218-1 and ISO 10218-2 cover the safety requirements for industrial robots and their integration and have been well accepted and used for decades. ISO 10218-2 has a section on Collaborative robot operation (Clause 5.11) and describes it as being a special kind of operation between a person and a robot sharing a common workspace. It contains information regarding general requirements, requirements for the workspace and talks about different operations that can be selected to ensure a safe working environment.

Even though the robot and the person “share” the common workspace, there is no mention of when they are sharing it and what they, or the robot, are doing at the time. The common misconception of a collaborative robot application is that it is limited to applications in which the robot can happily carry on doing what it normally does (riveting for example?) and that a person can completely interact with it, walk anywhere, at any time and everything remains safe. It is true that this would be a collaborative application, however, this would also be extremely difficult to implement without leaving a considerable risk. 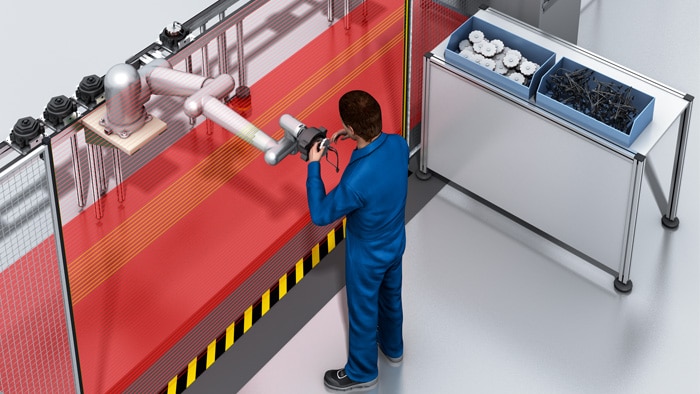 The most important thing to understand is that the safety concept evolves based entirely on the risk assessment for each collaborative application. ISO 10218 gives a list of different safety features that can be appropriately selected to ensure a safe working environment, but it gives limited information on how to implement these safety measures.

In 2016, the technical specification ISO/TS 15066 was published which provides additional guidance for collaborative robot operation when a robot and people share the same space. This document supplements and supports the safety standards for industrial robots ISO 10218-1 and ISO 10218-2 and describes the methods (safety features), which can be used to implement collaborative operations in more detail. A collaborative operation can include one or more of these methods and they each have very different requirements.

With the advance of Safe Motion control, it is possible for a robot to safely stop under power and then automatically restart if a person walks away. A full risk assessment would have to be carried out, however, this method allows a category 2 stop as per IEC 60204 (Safety of machinery - Electrical equipment of machines) as long as the control circuit is compliant with IEC 61800-5-2 which is the standard that covers functional safety requirements for adjustable speed electrical power drive systems. There are requirements for this method such as:

The standard gives a truth table: 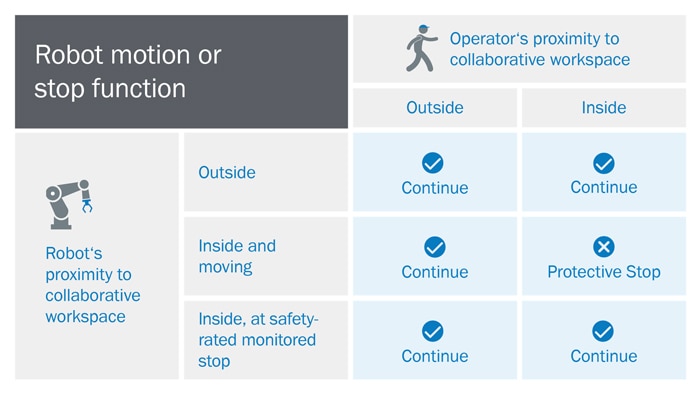 There are two reasons that this method may desirable. The first is to teach the robot-specific paths and the second is to use the robot for power assistance. This method involves an operator moving the robot through motion paths. The standard contains lots of requirements for this method and takes into account things like maximum speed allowed, the load, whether space limiting is used or not and additional requirements regarding the type and location of any emergency stop buttons or enabling devices. An operator can only enter the collaborative workspace following a safety-rated monitored stop unless the “power and force limiting” method is used.

This method is about allowing maximum productivity and dynamically speeding up and slowing down a robot to a full stop depending on the protective distance between the robot and persons. Implementing this would require quite sophisticated sensing technology, like a safety laser scanner, safe speed monitoring and some complex programming. An example of this in an application could be sequence monitoring.

In this example, the robot slows down as a person walks towards the robot to a safety-rated monitored stop and then slowly speeds back up to normal speed as the person walks away. Like all methods a full risk assessment would be the first thing to start with to check that no one can “disappear” in the protective area for example. Like hand guiding, there are additional requirements, for example, if the operator safety is dependent on limiting the range of motion then safety-rated soft axis and space limited should be applied or if “power and force limited” is not used that a protective stop should also be equipped etc.. The harmonized standard ISO 13855 (Positioning of safeguards with respect to the approach speeds of parts of the human body) can help the user with the calculations of distance and speed.

Of all the methods, this is the most provocative and controversial. It describes the possibility of allowing physical contact both intentionally and unintentionally between a robot and a person. This requires a robot specifically designed for this type of operation and includes requirements such as:

Risk reduction for this method is achieved by either inherently safe means or by keeping hazards below threshold limits, which are determined through risk assessment. The measures can be passive which addresses the mechanical design or active, which addresses the control design. A passive design measure could be adding foam and rounding edges and an active design measure could be limiting the force, velocity or torque.

The technical specification provides guidance in Annex A, which is only informative but it even states that the values for power and force limiting are expected to change since collaborative operation is a developing field and there is continued research on this subject. The Annex splits the body into 29 specific body areas.

The primary thing to consider is where on an operator’s body is contact likely to occur, the limits can then be used to ensure the application remains safe. Defining limits is an extremely difficult thing to do and there are a number of different things that may have to be taken into account when calculating the limit in different cases, such as (EN 12453:2000 which covers safety in use of power-operated doors):

The specification references a number of documents that it has used in the consideration of the limits and it states that contact between a human and a robot can be modeled and the energy resulting in a fully inelastic contact can be calculate by taking into account:

The specification then gives Table A.2, which contains a list of maximum values for quasi-static (crushing etc.) and transient (striking etc.) contact between people and a robot system.

However, it is much more important to make sure that the robot application is safe rather than worrying about what to call it.

Some useful standards applicable to the robot safety:

”The holy grail of human-robot collaboration”

Installed Base Manager – get the complete overview