The darker the object, the harder it is to detect as the distance increases. But penguins in the Antarctic can now keep their black tailcoats on when a drone hovers overhead and the integrated laser scanner registers them. For researchers and scientists who map and count penguin colonies in order to collect urgently required information about the effects of global climate change, the combination of a laser scanner and flying robotics is a new technology that certainly receives a warm welcome.

The LD-MRS laser scanner from SICK connected to the drone demonstrates a very large working range of 300 meters despite its lightweight design. Even with black objects (10 percent remission), its scanning range is still 50 meters. This means that even when the penguin has the back of its black tailcoat turned toward the drone, it will still be registered by the scanner. The 3D lidar sensor captures its environment without any gaps and, thanks to the integrated object tracking feature, reduces the time taken to count the animals across the large population area from several weeks to just a few hours. 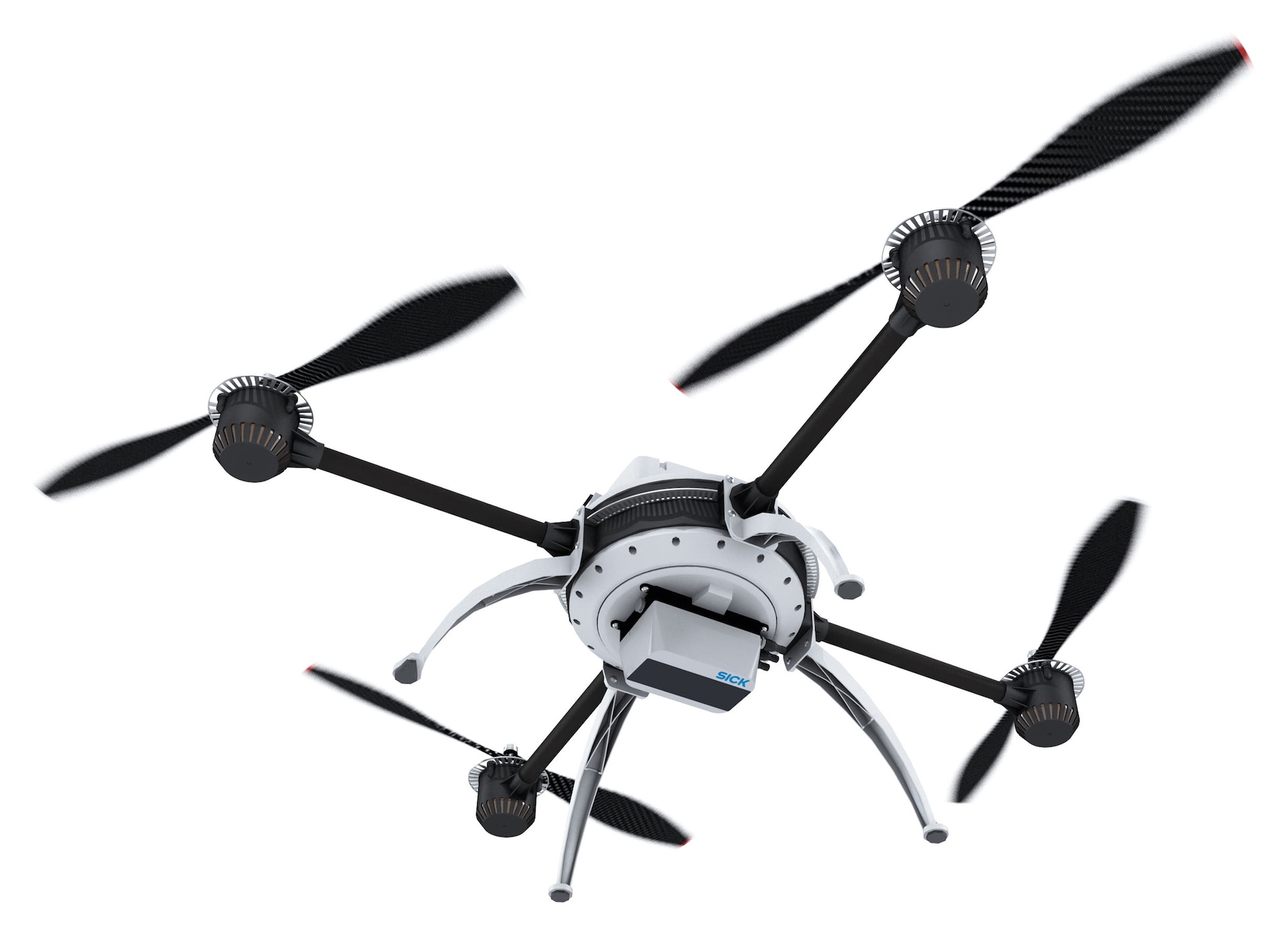 However, it’s not just science that is showing a great deal of interest in the diverse range of applications on offer. Most of the measuring and monitoring tasks that previously demanded the expensive deployment of helicopters can now be completed with ease by the more cost-effective UAV (unmanned aerial vehicle) technology. Pipelines, power lines, yet also wind power plants that are emerging as part of the energy revolution, can be monitored and maintained successfully using this technology. In the forestry industry, for example, tree populations can be studied in terms of their height, spacing, number, and diversification with minimal effort thanks to the large scanning range and high resolution of the measurement technology. Precise 3D mapping to create an inventory of bulk materials on coal, ore, and waste stockpiles becomes just as simple as the measurement and charting of rivers, canals, and coastal areas. In combination with a multispectral camera, the intelligent measurement sensors on board UAVs collect all the necessary data to determine the bio mass and fertilizer requirements on banana plantations, to name one example. 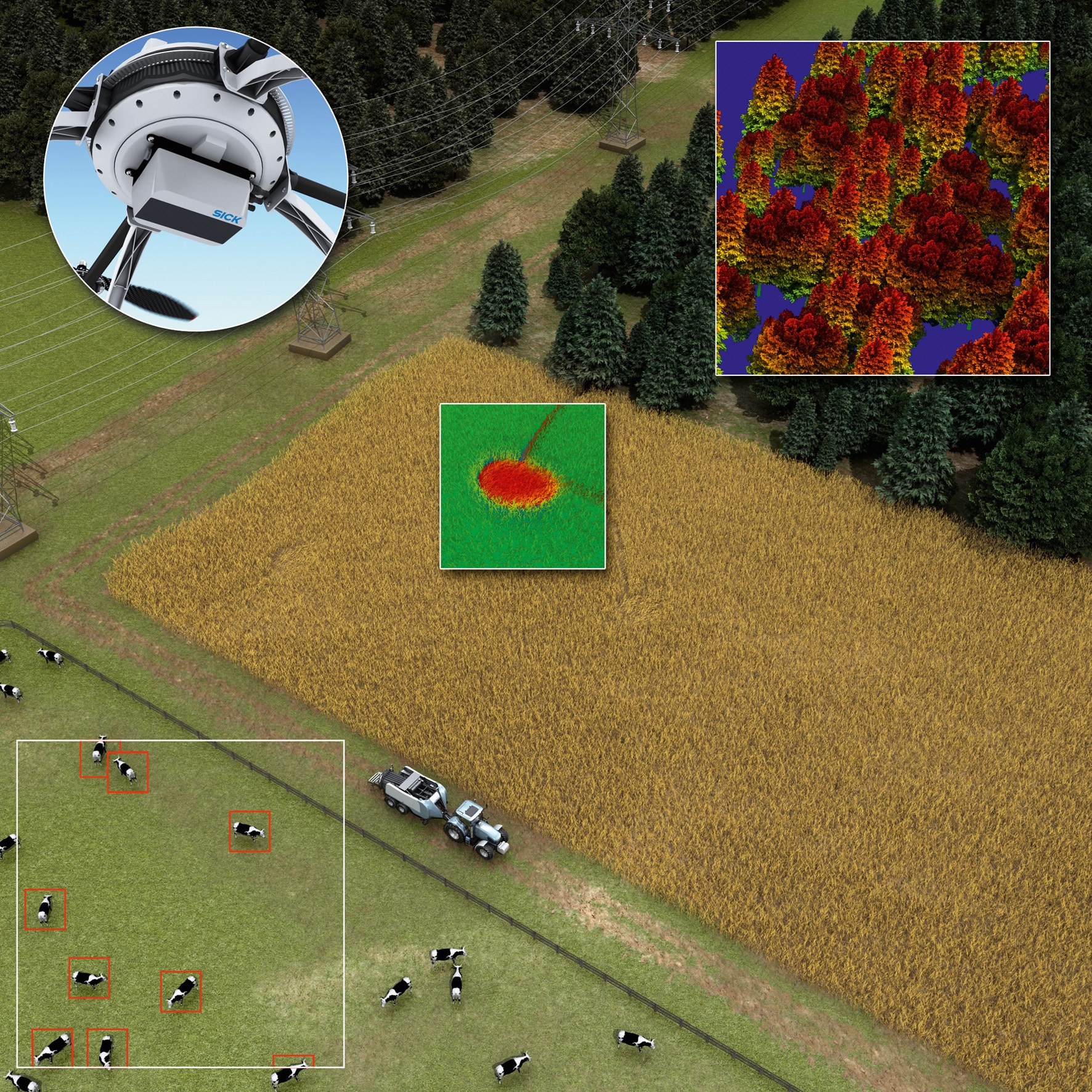 Originally developed for the automotive market, the LD-MRS multi-layer laser scanner was initially kitted out for the industrial market. The harsh environments found in ports and surface mining provided optimum applications, as the laser scanner and its multi-echo technology was also reliably able to scan through dust and rain. Due to the growing demand from the market for drone deployments, we started to develop the product further – initially focusing on the software. Working in conjunction with the Robotics Innovation Center at the German Research Center for Artificial Intelligence (DFKI), a ROS (robot operating system) driver was created for the LD-MRS, which enables the scanner to easily be integrated in robotics applications.

When it came to the specific use of the scanner in a UAV, however, the main challenge was to drastically reduce its weight. With this in mind, the device hardware was optimized further – a process that involved evaluating suitable materials that would be able to comply with the ruggedness required of an industrial product. With a current weight of 770 grams and the IP class 69K, the LD-MRS is, first of all, one of the lightest scanners with the highest scanning range available on the market, and secondly, it is so rugged that it still carries on working even after plunging into a bog.

During flight, a drone generates considerable vibrations, which can lead to significant problems with measurements in an integrated scanner. With the aid of simulations and data from a wide range of applications, we were able to get rid of these risky resonances. Although it is an industrial product, design, look, and feel were also important to us during the development phase. Based on the principles of aerodynamics and by making a number of adjustments, we have arrived at the perfect compromise between stability and lightweight design. The successful deployment among the penguins in the Antarctic shows that this effort has paid off.