How will products and goods be transported in the future? How can we produce in a more resource-efficient way? How can we visualize data better, and thus simplify our everyday lives and our work? These were the questions that 24 teams at SICK Solution Hackathon asked themselves, questioning boundaries and turning science fiction into science facts. The young developers were supported by so-called Hack Coaches – experienced developers from participating companies, such as SICK, SAP, Bosch Rexroth, Trumpf, NTT Data, and many others. Let's take a look at their ideas and solutions. 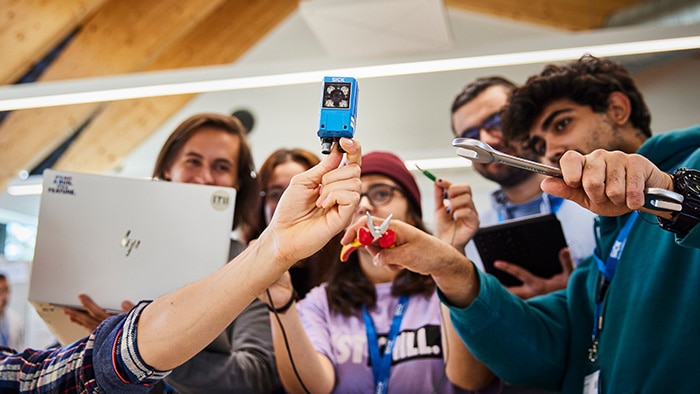 The winning solutions: stop the food waste and control mobile robots via voice and gestures

Two of 24 teams were able to convince the public jury: Varun Burde, Marina Ionova, Serhii Voronov, Elizaveta Isaianova (all Czech) and D. William Campman (USA) – the Testbed for Industry 4.1 Prague team – won the Technological Excellence category with their idea of a mobile robot controlled by voice and gestures. The idea behind it is that mobile robots are equipped with voice control as well as a camera and communicate via a 5G network in the cloud. In this way, the robot can be steered in a certain direction or stopped by simple gestures or spoken commands. Robots in action! The Testbed for Industry 4.1 team won in the "Technological Excellence" category.

Robots in action! The Testbed for Industry 4.1 team won in the "Technological Excellence" category.

In the “Best Business Idea” category, the audience voted the team with Marton Juhasy, Christian Mety, Helena Hauter, Bence Bejcyz and Emil Gregersen – the Copenhagen Collective, from the Technical University Copenhagen as the winner. With their solution, the five students aim to prevent organic waste in commercial kitchens and ensure that more food ends up on plates than in the trash can. The team used cameras and a sensor that can digitally map factors such as odor to visualize data about the condition of food from the refrigerator. The sensors trigger a signal on a smartphone when a defined threshold is reached, prompting kitchen staff to take action. 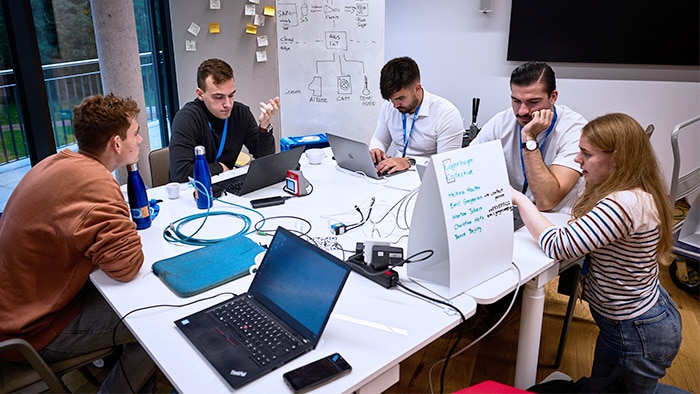 Winners at work. Team Copenhagen Collective was chosen by the audience as the winner of the category "Best Business Idea".

Winners at work. Team Copenhagen Collective was chosen by the audience as the winner of the category "Best Business Idea".

How did other teams work on the challenges in this 3-day contest? For the Swedish team from Mälardalen University, the first day was all about brainstorming and deciding which idea would work best for everyone, the second day was spent creating the prototype. Their topic was compressed air leakage, a well-known problem in manufacturing and industry. Hanna Brouillette, a representative of the team, explained how their collaboration worked: “You have to have an open mind, especially in the beginning. Otherwise, you can get stuck.” Ideas as bright as their shirts. The Swedish team MDA developed a solution to locate air leaks in industry.

“In a lot of industries compressed air is used - and air leakage is a big problem”, Hanna explained as she tested her prototype in a trial run. Her solution includes sensors and a microphone that measures vibration and noise to identify two common signs of air leaks. “Connectivity is a possibility to create a better solution, by getting all the important data together. In the end, if everything works like in their prototype, this idea could really solve a typical industrial problem”.

Find a way – or make one

Alina Göttig came to the hackathon on her own and found her team right here! When she arrived, she first started talking to the hack coaches and searched for new ideas. By chance she met Toni Veikko and Josia Joakim from Finland and formed a team with them. Their idea was a virtual AI shopping assistant (called a SAM) for malls in the form of AR glasses that make purchase recommendations and guide people through the mall - literally "selling a vision," as they put it. In the absence of a mall, they recorded a video within the SIA Campus hackathon venue, using the snack bar to replace a mall. This video was planned as part of their pitch to visualize SAM's capabilities. Their motto: “I shall either find a way or make one”. They definitely found one. 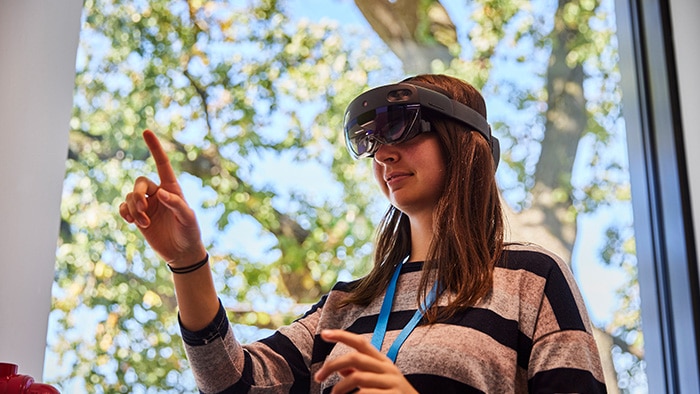 Moving boxes like some kind of 3D Tetris? At first glance, that's what Team SICC's project looked like, but there was much more behind the scenes. Merlijn Däscher from team SICC explained that their idea came from a visit at a distribution center: “We saw someone packing boxes and preparing it for shipping and we thought, ‘there must be an easier way to do this!’” Team SICC found a solution to this problem. They trained an AI model with Deep Learning to figure out how to stack boxes perfectly. Different carton sizes, different heights - all these aspects need to be taught to the AI so it can work better and increase efficiency. In the end, it should be able to do this work agilely and effectively on its own, increasing productivity in factories and in the manufacturing industry, as well as efficiency in other logistics sectors, such as stacking suitcases on an airplane. 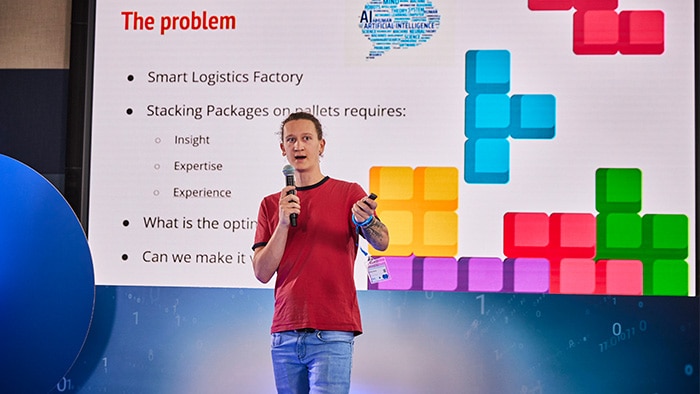 Vividly presented. Team SICC designed an AI model to figure out how to stack boxes perfectly.

On their journey, the teams were not left alone: They were supported by hack coaches from 12 industry partners who stood by them. They provided software and hardware, tools, experience, advice and knowledge. “No code is faster than no code”, was the message of Kay Jeschke from SAP (a message he also presented on his shirt!). Without coding, they can create applications much faster and easier - perfect for one of the goals of SICK Solution Hackathon, to make things as easy as possible. Kay has a clear advice for the participants: “First you need an idea, then you use analytics with some mock-up-data. Our trial version is installed in 15 minutes, then you need two hours of training - and then you still have more than 45 hours left to build an application!” 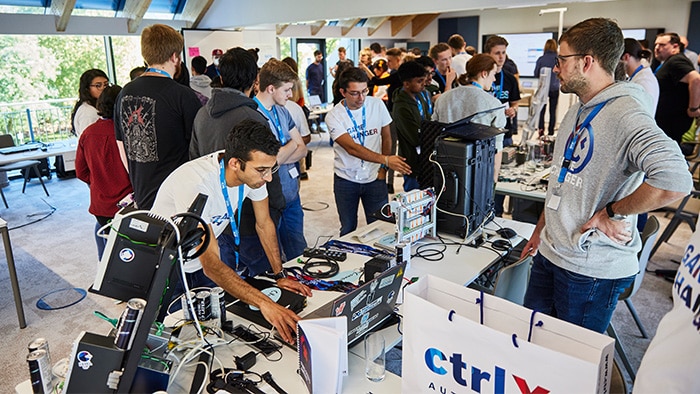 The turnout was great. On the first day, the hackers familiarized themselves with the offerings of the industry partners.

The turnout was great. On the first day, the hackers familiarized themselves with the offerings of the industry partners.

For NTT Data, collaboration was one of the most important points, not only in their daily work but also in this hackathon. Networking and creating new partnerships are their main goals, along with putting their use cases, like AI Nose, into practice for the hackers here. With full success: All their tools are used in various projects. Dries Guth, Head of Co-Innovation Labs & Ecosystems, at NTT Data says to the young professionals: “Always think of your possible customer. Feasibility is of course the first step, but instead of thinking of the economic viability, look for the desirability. If you find someone who wants to buy your product, it will be a success in the end.” 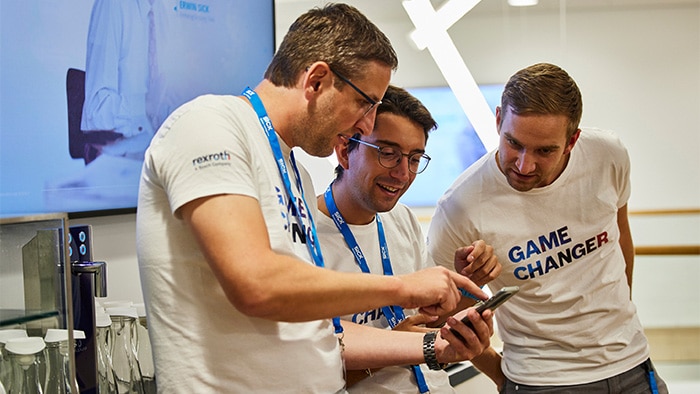 True game changers. The Bosch Rexroth team supported the hackers in their ideas.

True game changers. The Bosch Rexroth team supported the hackers in their ideas.

Kai Müller from Bosch Rexroth presented their programmable logic controller – and offered it to the participants. His advice? Kai recommends starting to implement the idea as early as possible and trying out appropriate tools. “You got plenty of tools here, see them as toys - you can play with them.” For him and his team of Bosch Rexroth it is the best to see the hackers already using them and putting them in action.

Dive in again into the hackathon

All information about the hackers, the industry partners and the numerous creative solutions can be found on our hackathon blog „Follow the Journey“. 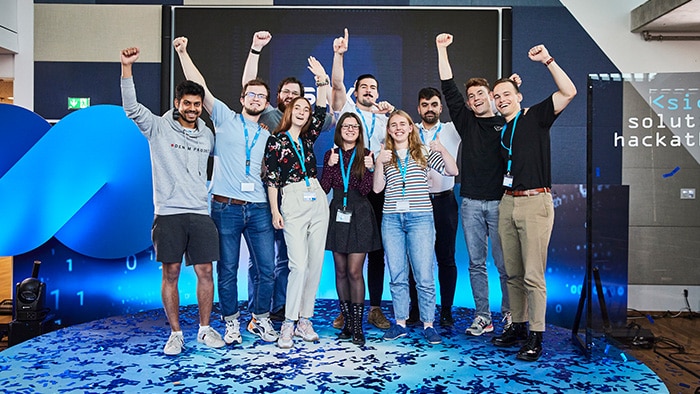 The winners of the SICK Solution Hackathon 2022. The teams Copenhagen Collective & Testbed for Industry 4.1.

“Technology is pushing our brains to new limits”

“Challenges are a great chance to learn and grow”

You can find all information about our hackers, the partners and the pitches in our blog.