Prevention of collisions when loading and unloading in ports

Loading and unloading in ports is constantly fast paced, while at the same time, safety is the highest priority. Preventing collisions with ship parts by monitoring port cranes can be particularly challenging, and accidents of this kind often cost several hundred thousands of euros. APM Terminals in Zeebrugge, Belgium wanted to mitigate the risk of such occurrences. APM Terminals is a subsidiary of the Maersk Group, which operates 75 transshipment ports across the world. The company owns the port of Zeebrugge in the Netherlands, at which ships that each transport 8,000 to 10,000 containers dock. Around 2,000 of these containers usually have to be loaded and unloaded in the port. "Handling has to be extremely fast," explains Steven Lowyck, Control Engineer at APM Terminals. "Typically, each ship has a time window of 24 to 36 hours for docking. After that, they have to continue on their journey so that they arrive at the next port on time." Loading and unloading is therefore planned meticulously. The lifting devices used to load and unload containers at high speed are mast cranes (ship-to-shore) with a height of 80 m and booms measuring 65 m in length.

Risk of collision with deck superstructures

The 65 m long crane booms extend from the dock over the ship's deck and are often called "drawbridges" because the booms can be folded 45° or 90° upwards in order to allow ships to pass. The boom is located at a height of more than 55 m but the deckhouse, the funnel and the numerous antennas on the ship usually tower far above this height. As the crane moves along the dock, the booms can collide with the deckhouse or other parts of the ship, which can cause catastrophic damage. Owing to the large distances, crane operators sitting high up in the cranes cannot always see every detail. Sometimes the operators also have to move containers that are dangerously close to the deckhouse.

Despite the use of cables intended to stop cranes at a risk of collision, collisions still continued to occur. By installing SICK's LMS511 laser scanners on all cranes, APM Terminals has now managed to solve this problem once and for all. The scanners have a detection range of 80 m, allowing crane movements to be adjusted at a very early stage. As soon as an obstacle is within 9 m of a boom, the crane automatically switches to a slowed down operating mode. At a proximity of 2 m, the crane stops completely. 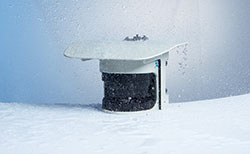 APM Terminals field-tested a single laser scanner for a year. Due to the positive results, APM went on to install the system on the six other cranes. Two scanners have been installed on each crane; one on each side. This means that each scanner has to monitor an area 65 m in length and 9 m in width (the width corresponds to the width of the speed limitation zone). In light of these requirements, it's plain to see that the large detection range of SICK's laser scanners (80 m) is by no means an unnecessary luxury. Bart De Roo, Control Engineer at APM Terminals, explains: "We also need an extremely high resolution to allow even small parts such as ship antennas to be detected. This resolution is guaranteed, and the response time is short enough to enable timely reactions once obstacles have been detected." A further advantage of the LMS511 scanner is the option to remotely access all of the scanner's parameters and data via Ethernet. This option is utilized by the control system that does not just receive data from the scanner, but that can also return parameters. This is the case, for example, when the crane boom is folded 45° upwards, meaning that the scanner has to monitor different detection ranges. Communication via Ethernet also means that technicians do not need to climb the mast in order to conduct error analysis.