More than 400 different pressed parts form the basis of the body-in-white of a BMW 3 Series. For this purpose, at the Munich Presswerk II of the BMW Group every day sees the processing of about 600 tons of sheet steel, which give rise to more than 130,000 body components. In light of this volume, it is essential to detect and sort out defective components as early as possible. No problem, with Inspector I40 vision sensor from SICK. 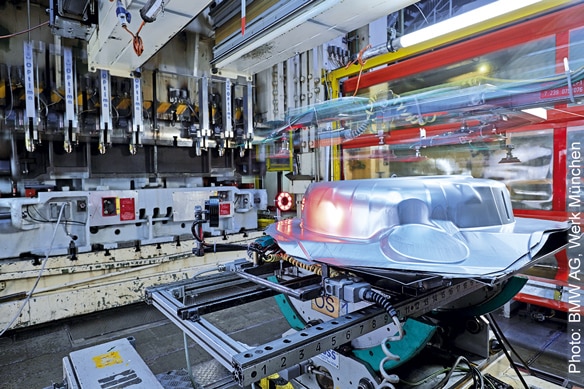 In the area of the pressing plant, previously the quality of the wheel housings for the BMW 3 Series was checked manually by an employee only at the exit point of the press line - which means after the steel sheets had been drawn, bent, punched, and trimmed to size. Consequently, the car manufacturers request involved detecting cracks in the metal sheets immediately after the first processing step.

To this end, SICK developed a solution that was just as simple as it was cost effective. Its core is the Inspector I40 2D vision sensor with integrated lighting, image evaluation, and Ethernet interface. 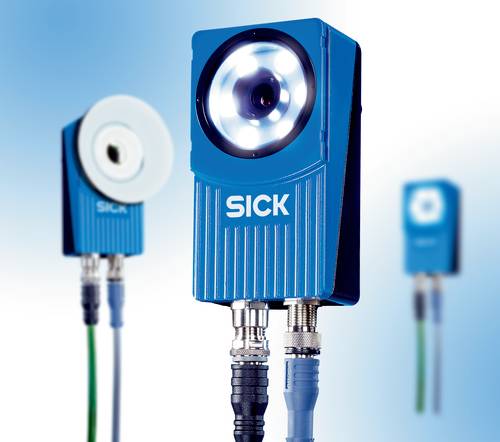 Independent of the components, crack inspection already takes place at the body panel deposit of the orientation station, which serves as an intermediate storage space. A so-called feeder deposits the metal sheets, deep-drawn in the lead press, into this station. Exerting a press force of 1,800 tons, this press has already performed the major forming of the part. The subsequent presses take on additional cutting and forming processes, resulting step by step in the creation of a precisely shaped complex component.   Mounted above the orientation station is the Inspector I40 vision sensor from SICK. The ICL300 external illumination unit illuminates the metal sheets from the outside. The sensor is actuated in such a way that it works as a pixel counter in the dark. Components that are OK remain completely in the dark. Only in case of cracks, the light passes through, appearing as light pixels. When the sensor detects a crack in this way, the facility is stopped, with the corresponding error message issued. Error-free drawn components are transported to the next press by means of another feeder. 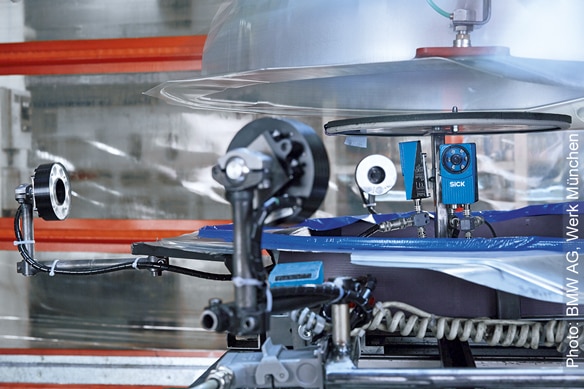 The Inspector I40 vision sensor is mounted above the orientation station. The ICL300 external illuminationunit illuminates the metal shetts from the outside

Employing this simple solution makes it possible to do without an additional PC for image evaluation. The sensor is integrated directly into the press controller via its input and output subassembly. It is possible to integrate this type of crack inspection without major effort into any existing facility and to use it for any formed parts, says one employee at BMW Maintenance. Initial trials in production operations yielded extremely high accuracy in detecting torn components. So far, the crack inspection in this form has been used at the Munich Presswerk for two different components. However, we do not rule out deployment for additional parts in the future.