The Chinese railroad network carries an average of 42 million passengers every year, making it the world's busiest transportation service. In the past, rockfalls and debris avalanches falling onto the tracks presented a significant danger for train personnel and passengers. Today, LMS111 2D laser scanners reliably monitor the tracks - especially at tunnel exits and on bends - and issue an alert if the tracks are covered by debris.

Baoding Galaxy Electronic Technology Co. LTD. is a system integrator working for the Chinese railroad. The company provides safety solutions such as CCTV for the rail sector The increasing risk of falling rocks and debris avalanches posed a particular challenge for the company. As landslides can occur at any time, it was unsuitable for track workers to continuously inspect. An attempt to monitor parts of the network with cameras also failed, as the systems were extremely sensitive to heavy rain and other bad weather conditions, which would often lead to false alarms.

Baoding Galaxy discovered the LMS111 2D laser scanners from SICK. This outdoor sensor reliably detects objects falling onto the tracks - even in heavy rainfall - thanks to its protective cover.   An LMS111 system can monitor up to 20 meters, with the LMS151 high-performance variant offering an extended range of up to 50 meters. Areas in which there is a higher risk of landslides are equipped with multiple sensors, for example where the route runs alongside a mountain slope 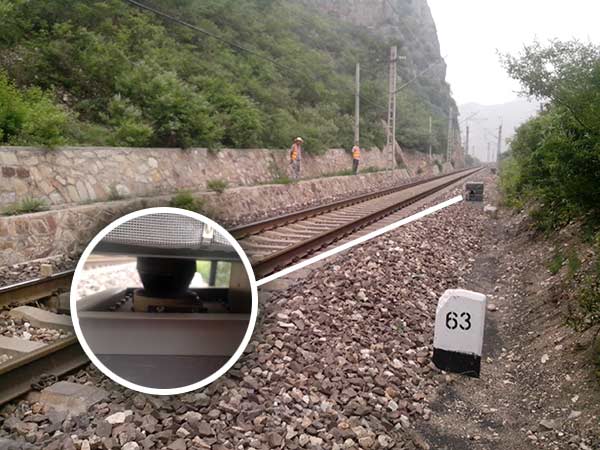 The laser scanner uses non-contact laser beams to scan the outline of its surroundings on a plane and measures its surroundings in two-dimensional polar coordinates. If a laser beam hits an object, the position of the object is determined in the form of distance and direction. If the LMS detects an object on the tracks, a wireless alert will be sent to a central control unit, which then instantly informs the driver of the danger. The monitored areas are set up in a simple and convenient way using SOPAS ET configuration software. For cold winters, such as those experienced in the north east of China, the LMS111 is equipped with heating to leave it fully functional from -30 °C to + 50 °C.