More efficiency in the warehouse through automation: This is one of the requirements of customers on Jungheinrich. Using safety components from SICK, the intralogistics specialist Jungheinrich is transforming more and more of its vehicles into automated guided vehicles (AGVs). Working in collaboration, they developed an especially maneuverable electric high lift truck – true to the motto: moving more together. 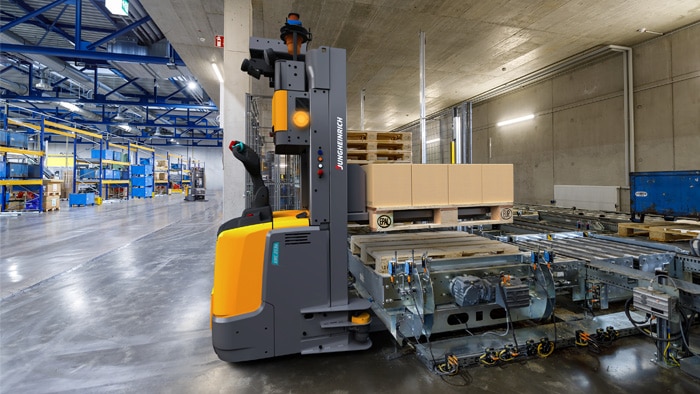 The project brief sounds chic: “Smooth vehicle ballet rather than stop-and-go traffic” for the lift trucks in the warehouse. In plainer terms, the project is about achieving a higher vehicle performance and thereby a higher throughput, and about saving costs and boosting productivity thanks to higher speeds even in tight areas (with curves). And last but no least, about maximum safety for humans, products, and vehicles.

The key to more efficient processes is automation. Jungheinrich is very much in demand as an expert in intralogistic matters, especially when it comes to the targeted automation of transport processes. The Development Manager for Automated Guided Vehicles (AGVs) at Jungheinrich, Henrik Schröder, defines his company as an innovation driver in a strategic growth market. “It therefore comes as no surprise that we would undertake this project”, he winks. The “project” he is referring to is the development of an automated version of the hand-guided high lift truck called the ERC213a, where the “a” stands for automated.

A real starting advantage was that there was no need to reinvent the wheel in this case. The automated version builds on the long-standing vehicle know-how that had already been incorporated into the manually guided models in the ERC series, which have been performing their loading and unloading tasks in high volumes for many years now.

The cost factor is also becoming increasingly important to Jungheinrich customers, of course. The shortage in skilled personnel is an ever increasing problem, in particular in logistics. “It is very hard to find employees who can drive high lift trucks,” says Henrik Schröder. This is a real challenge in particular for companies who run a 3-shift operation. Automated vehicles can make up for this shortage of employees.

The end of “touch” driving

A further factor is the damage-free movement of goods. “Ruined product due to run-ins with careless forklift drivers used to be a real cost factor. Cartons had to be protected with expensive barriers.” Henrik Schröder also remembers the traces left by driver-operated lift trucks: “They often drove until they contacted something. With an automated guided vehicle, however, you won’t find a single scratch anywhere.” Using the new ERC213a, goods can be picked up and moved significantly more gently thanks to SICK’s photoelectric proximity sensors, distance sensors and ultrasonic sensors. Furthermore, 3D collision protection sensors prevent the AGVs from ramming into other vehicles being driving around or parked with raised forks, for example. 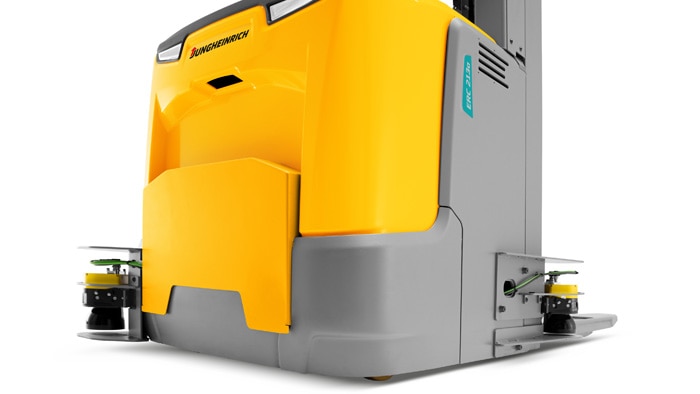 Another decisive criterion is the speed: “When we started developing the ERC213a, we had already selected the microScan3 safety laser scanner from SICK before its official market launch,” says Henrik Schröder. These scanners look up to 9 meters ahead using up to 128 possible protective fields. “But anyone can drive straight ahead quickly,” the development manager knows and brings up the topic of agility through curves.

The faster the vehicle is required to drive through curves, the further ahead the safety laser scanners need to protect the path of travel. And the more protective fields that are available, the more agile the vehicle can be moved. Dynamic switching of the scanner fields, depending on speed and steering angle, is made possible by the safe motion functionality of the Flexi Soft safety controller. Safe encoders record the speed and steering angle information and pass it on to the safety controller. The logic created by Jungheinrich in the safety controller activates and processes the feedback from the protective fields. This is no easy task.

The microScan3 scanners from SICK allow Jungheinrich to configure a large number of protective fields in a tailored manner. Using a simulation tool, the engineers at Jungheinrich first designed the necessary protective fields virtually and then imported them into the laser scanner. Dennis Flottran, Co-Project Manager Automation at Jungheinrich see this as a special feature of the collaboration with SICK: “The import function of the microScan3 allowed us to define a very large number of fields and thereby fine-tune the cornering behavior.” 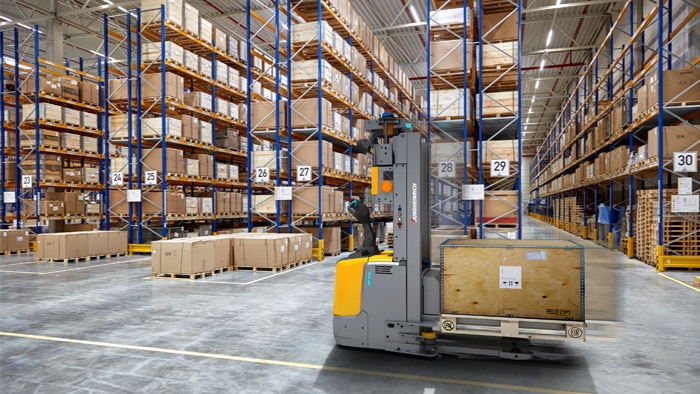 No slowing down even in tight curves

This enabled Jungheinrich to obtain a realistic impression of how the vehicles would behave in the system. Up until then, we only had one dataset of rectangular protective fields. “Quadratic, practical, good,” comments Dennis Flottran, “but in the field at the customer site we had to often manually intervene during tight cornering in the commissioning phase and adjust the driving behavior.”

Thanks to the new microScan3, the ERC213a is now able to safely drive around obstacles due to the improved situational adaptability. The high angular resolution was particularly important to Jungheinrich as it enables the protective fields to be designed even more precisely and thereby achieve greater performance. The high lift truck navigates small path deviations with no significant loss of speed. This avoids, for example, traffic jams when passing through a narrow fire door and there are multiple vehicles following one another. 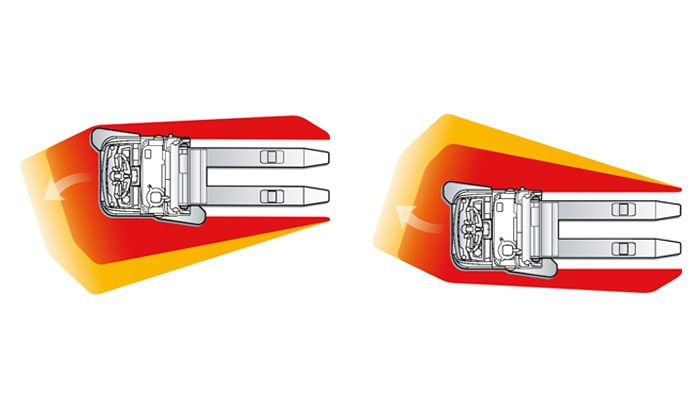 Intuitive software for importing the protective fields and monitoring cases

The intuitive to use Safety Designer software for configuring the protective fields is also supplied directly by SICK: “The complete package of sensors plus software allowed developers a great deal of freedom in designing the protective fields,” finds Dennis Flottran. Furthermore, the system is also very rugged: The innovative safeHDDM® scanning technology makes the microScan3 especially immune to disturbance from ambient light or dust. 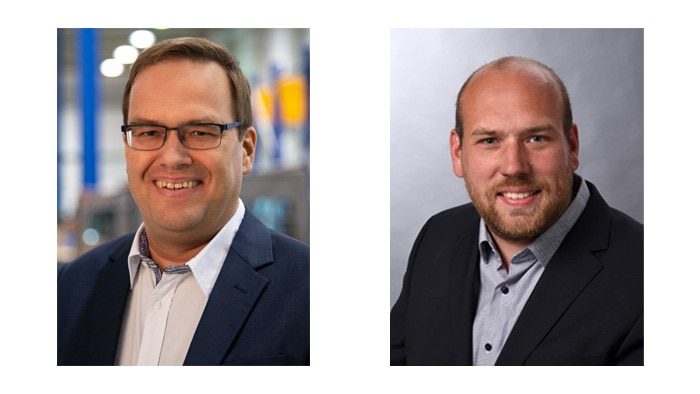 A collaboration for targeted innovations

“There were some exciting overlaps while developing this vehicle. SICK launched the microScan3 in the market – we developed the ERC213a,” explains Henrik Schröder. “We were quickly understood at all times and received fast support. When a problem arose, no one was left on their own.” One of the collaboration partners at SICK was Daniel Salas, Key Account Manager for Industrial Vehicles: “The feedback from Jungheinrich enabled us to significantly further improve the scanner software. That helped us a lot too.” This collaborative approach to problem solving increased the innovative capacity on both sides.

This is evident in other sensor technologies as well, such as load detection concepts, where SICK was able to think outside the box at the outset. For example, which sensors apart from the obvious ones could potentially be used. Whether it be encoders, load detection or anti-collision, in many cases it was possible to employ newer technologies that had not been considered before. This enabled all current technical possibilities to be fully explored for the ERC213a. The result was faster cornering, higher performance, and greater safety. 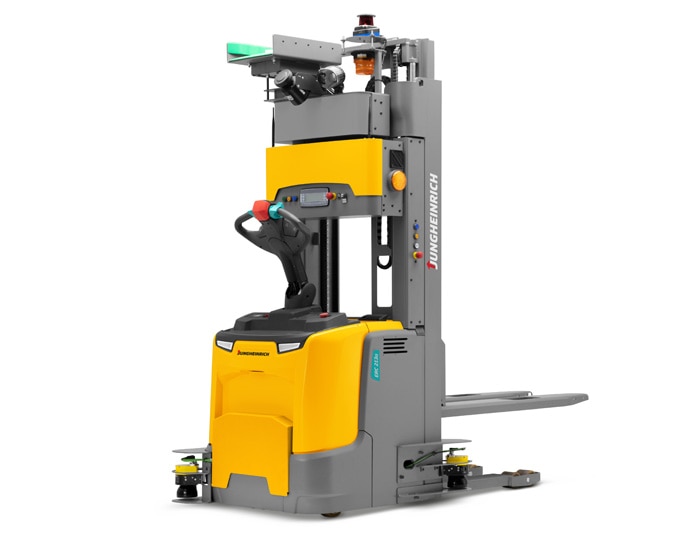 Higher throughput thanks to more efficient transport processes: ERC213a can be used as a standalone system or integrated into existing IT structures

Higher throughput thanks to more efficient transport processes: ERC213a can be used as a standalone system or integrated into existing IT structures

Henrik Schröder summarizes these advantages with the help of an example: “With the new ERC213a, the technical capabilities of SICK’s personal protection sensors enabled us to record a 20 % increase in throughput compared to a vehicle employing the previous protective field concept.” Whereas the customer used to require five vehicles, now they only need four. Daniel Salas apologizes for this in a joking manner: “Now you will sell fewer vehicles.” To which Henrik Schröder replies: “And you will sell fewer scanners.”

Jungheinrich
As the “Jeep” is to SUVs, so is the “Ameise” (German: ant) from Jungheinrich to lift trucks: This product name has long since become a generic term for these trucks. Their creator Jungheinrich is known at freight forwarders and building sites around the world as the manufacturer of the yellow lift trucks and manned forklift trucks. In just under 70 years, this Hamburg company and its now 23 subsidiaries and support centers has developed into a globally active service provider in various areas of intralogistics. Its portfolio ranges from the aforementioned Ameise right though to fully automated logistics systems with intelligent software solutions.