Cermex, a company based in Corcelles les Cîteaux, is the cardboard packaging division of Gebo Cermex, one of the world market leaders in the packaging line industry. It has developed a high-performance combined packaging line consisting of a station for packing cardboard boxes from the side and a palletizing station. This combined line assembles the boxes, packs them from the side, labels them and palletizes them using robots in one ultra-compact manufacturing cell. 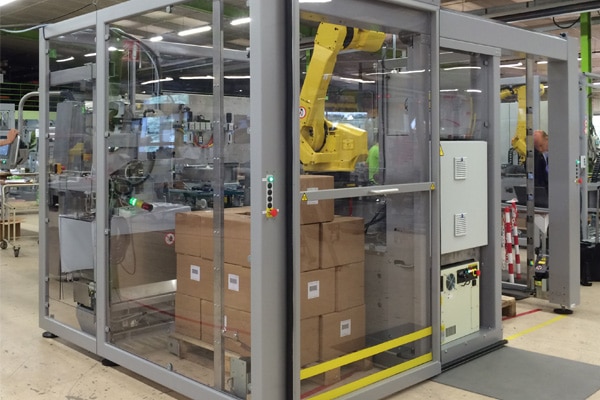 The products are stacked in the fully automated machine before being packed into folding boxes (from the side). After this the flaps of the boxes are sealed with adhesive tape. At the end of this phase of the process, the boxes are taken by a robot to the automated labeling station, where a bar code is attached to them. After this the robot places them on a pallet. When the pallet is full, the software end positions managed by a dual-core processor ensure that it can be safely transported by a manned forklift truck. The palletizing area of the machine consists of two stations to increase productivity. One is active (accepting boxes) and its access area is closed off by a sliding door. The other is deactivated, its access is open and an empty pallet is available for loading. Once the pallet is full, it is removed by a manned forklift truck and the production process continues without interruption at the other station. Each of these palletizing stations, which are alternately accessible, is monitored by a SICK S300 Mini safety laser scanner with a horizontal laser beam that scans the interior. This ensures that anyone entering the area of the deactivated station is detected.

In order to ensure that the production cycle is not interrupted if the protection system is breached, two monitored areas have been set up. If someone enters protection zone 1 (the larger area), the robot slows down. If the person goes further into the palletizing station, in other words, into protection zone 2, the robot stops. When the person leaves the monitored areas, the production process automatically continues without the need for manual approval. This operating mode is a good example of the cooperation between humans and machines. It leads to a significant increase in productivity, while at the same time guaranteeing a high level of safety. 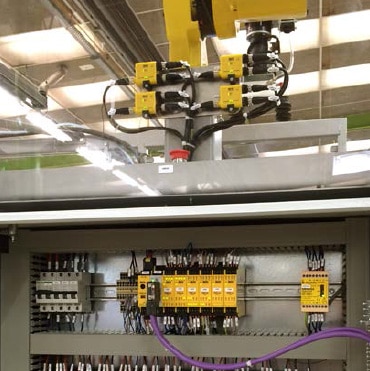 Fabrice Sauvageot, who is responsible for machine safety at Cermex, relies primarily on SICK solutions. The various opto-electronic sensors ensure that objects and their position can be reliably detected in a variety of different automated box packing and palletizing processes. However, the key innovation is the concept of machine safety. The machine is equipped with the Flexi Soft modular safety controller from SICK. Via a programmable logic system, it receives and processes all the signals from the machines safety devices. These include in particular the two S300 Mini safety laser scanners that are connected via the EFI safety bus and that all SICK safety devices are equipped with, together with the ten emergency stop devices and the seven monitoring sensors of the movable physical guards, some of which have interim interlocking devices. In order to reduce the number of inputs from Flexi Soft and the I/O modules, Fabrice Sauvageot has used the Flexi Loop integration concept that makes it possible to connect all the emergency stop switches and all the monitoring devices for the safety doors safely in series. Every Flexi Soft I/O module can have two Flexi Loop series connections, each of which consists of a maximum of 32 nodes. This makes a total of 64 sensors, including standard sensors. The information from the sensors/actuators connected to every node is sent to the central controller via the Flex Bus communication bus. Another option used by Fabrice Sauvageot for the interim interlocking devices on the door is a Y-connecting cable that enables the door monitoring function and the interlocking function to be controlled via a single Flexi Loop node using an available AUX output on the node. The innovative Flexi Loop cabling solution has allowed Cermex to reduce the number of I/O modules by four (in other words, 32 inputs) while maintaining the highest possible level of safety. Using a standard M12 male connector and an unshielded cable to connect the sensors and the nodes means that the cabling system is simple, which saves time and reduces the risk of faults. The local fault diagnosis function on each node in the form of LEDs and the visualization of faults in real time via the human-machine interface represent real added value. This makes it considerably easier to detect a malfunctioning sensor, locate the fault and identify the fault type when the machines are being set up. For Cermex, this results in significant time savings during the commissioning process before the machines are delivered to customers. For the future operators of the machines, it means that downtimes are kept to a Minimum.