Putting an end to waste

With the production of oil, the Russian government has recognized the potential to enhance its environmental protection credentials and improve energy efficiency. This also includes making good use of the associated petroleum gas (APG) that is a by-product of oil production. The complex measurement of the APG flow rate which is also required from a legal perspective is a task that the SICK FLOWSIC100 Flare is able to undertake, and under the most challenging weather and gas conditions.

Drilling for oil generally produces gas, either as bubbles or dissolved in the oil. This associated petroleum gas is predominantly made up of methane, is rich in energy, and is often flared. 400 million tons of CO² were released into the air this way in 2010. Methane can also be emitted here and is much more damaging to the environment than carbon dioxide. Valuable energy is also discharged. Based on the more than 150 billion m3 of associated petroleum gas that is currently burnt off, this amounts to more than 30 billion US dollars or 30 percent of the EU's energy consumption each year. Converting the gas into natural gas and using it to generate energy would make much more sense. In Russia, this has long since stopped being simply a side issue. The environment ministry has set the target for companies working with natural resources, of burning no more than 5 percent of the associated petroleum gas that is produced. The deadline for meeting this target expired in 2012. Russian oil and chemical companies are continuing to work intensively on programs which would enable almost 60 billion m3 of associated petroleum gas to be processed every year.

Why is it proving so difficult to implement the regulation?

It is partly due to the lack of access to gas pipeline networks, to storage facilities that are either non-existent or too small, or to not having sufficient processing capacity. In many cases, transporting the gas hundreds of kilometers across this sparsely populated country is also simply unprofitable. Currently, the volume quota that is compliant with the regulations officially stands at around 75 percent of the associated petroleum gas used. The Russian government has taken a great step forward with its efforts. What's more, the oil companies have announced a high level of investment up to 2014 for the construction of pumping stations, gas storage facilities, pipelines, and gas power stations. The incentive for these investments comes from the high penalties that are handed out if the quota is not met. What's more, it becomes even more expensive if no suitable device for measuring the amount of flare gas is available. This is where all companies are in luck, as the FLOWSIC100 Flare is able to reliably measure the amount of flare gas, even under extreme conditions. 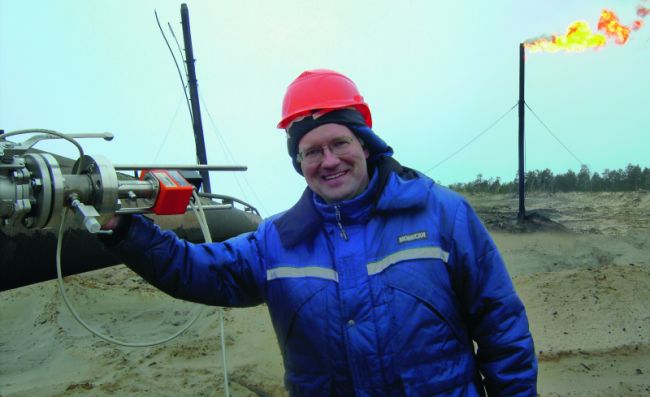 Holger Neumann, Head of Sales CIS, SICK AG
Documentary evidence of the amounts of gas must be provided, regardless of whether the gas is burned at the flare or processed. Measuring the mass flow, however, is complicated by fluctuating gas compositions and high flow velocities. In the event of emergency plant shutdowns or highly fluctuating delivery rates, velocities of over 100 m/s can be reached. Flow-generated noise and turbulence in the gas flow have a considerable impact on the measurement. Even short-term changes in the gas composition due to oil residue, water, sand, or sediment can significantly affect the measurement. Conventional gas flow measuring technology is therefore not suitable for this. The reliable measurement of gas quantities does however form the basis for precisely calculating the emissions levies in accordance with the Emission of harmful substances (pollutants) generated by the burning of APG in flares regulation. Measuring errors or the failure of the measurement at high gas velocities significantly increase the taxes that would be charged. The measurement inaccuracy must be smaller than 5 percent of the measured value for each plant site.

Which measuring device can already function perfectly under extreme conditions?

The measuring technology must be able to cope with a lot - Siberian winters with temperatures down to -60 °C and heavily polluted gas. Ultrasound has proved itself to be the leading technology and SICK has made a name for itself with its flow measuring instruments in the natural gas industry thanks to the devices' exceptional ruggedness and accuracy, including for legal metrology. We are pleased to report that operators of oil fields are also extremely satisfied with the measurement performance of the FLOWSIC100 Flare. They are able to rely on rapid and accurate measurement data, which is archived as permanent data, SICK Russia promises its customers. With the FLOWSIC100 Flare, the unique sensor contour of the ultrasonic probe is adapted to the flow behavior, allowing any faults to be effectively reduced. The ultrasonic sensors, one of SICK's core competencies, have an above-average power and can also take reliable measurements from highly polluted gases. This provides our customers with the assurance they require for their applications, confirms product manager Sven Holzbächer. State-of-theart signal algorithms also enable very accurate measurements to be taken, even with respect to the critical flow of particularly small quantities of gas. This ensures reliable and precise measurement across the entire flow in a flare gas plant - from range of 0.03 to 120 m/s. The ability to quickly switch between the fluctuating flow velocities in particular is very important to us, confirms the operations manager of one of the largest oil fields in Siberia. Other suppliers had difficulties here, including with the devices' self-monitoring function and diagnostic option. We take measurements with the 2-path layout. Then, if a measurement path fails due to contamination, the second path automatically takes on the role of the first. The device automatically detects when contamination on the sensors has increased and indicates when maintenance is required within good time. This enables us to plan maintenance work well in advance and means that the devices will not suddenly suffer a failure. It is for this reason in particular that we have found that ultrasound is the best technology when it comes to measuring associated petroleum gas. The gas can then be processed and transported to Europe, and recorded at defined measurement intervals for the authorities.