The 2D LiDAR sensors in the NAV product family provide the highest level of performance for the navigation of automated guided vehicles (AGVs). The unrestricted spatial location of positions is performed using reflector marks and provides the AGV with maximum flexibility by virtually changing the route in the vehicle computer. NAV 2D LiDAR sensors provide highly accurate spatial contour data about distance, angle, and remission, as well as reflector data, at high speed over a scanning path of up to 360 degrees. Multiple measurements made on each reflector are converted into precise reflector coordinates. This information makes it possible to transmit the precise vehicle position to the vehicle computer, even if ambient conditions change. The combination of spatial contour data and reflector data (mixed-mode navigation) enables line-guided vehicles to travel in areas where it is not possible to position reflector marks (automated truck loading or block storage areas, for example). 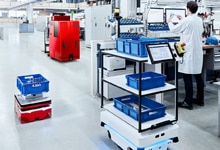 Industry 4.0 is picking up speed: Automated flexibility for mobile vehicles and carts